Ten years ago, a brown pelican was rescued from the Deepwater Horizon oil spill. He was eventually returned to the waters of the Gulf, but before being released was fit with a leg band bearing his new name—A04. And now, A04 has become part of an even bigger success story than its survival alone might suggest.

NOAA and the natural resource Trustees for the Bouchard Barge-120 oil spill in Buzzards Bay on the north Atlantic Coast, have released a draft amendment to the previously approved 2014 Final Programmatic Restoration Plan for public review and comment through June 17, 2020.

NOAA and the natural resource trustees for the M/V Presidente Rivera Oil Spill are proposing an amendment to a previously approved restoration plan from 1996.

NOAA and the other Gulf-Chevron Terminal Facility Trustees released a final restoration plan (PDF, 66 pages)  with $800,000 in projects to restore areas affected by multiple oil spills at the site in Maine.

NOAA and natural resource Trustees in the M/T Athos I oil spill case are proposing an amendment to a previously approved restoration plan from 2009.

NOAA and the other Gulf-Chevron Terminal Facility case Trustees released a draft restoration plan proposing projects to restore areas affected by multiple oil spills at the site in Maine. The proposed projects will improve river ecosystem habitats in the Penobscot River watershed for a wide variety of fish and wildlife using or migrating through areas affected by the spills.

The Cooper River/M/V Everreach oil spill Trustees released the Draft Restoration Plan and Environmental Assessment for Recreational Uses for public comment through July 27, 2019. The draft plan includes 2 preferred project alternatives to compensate for recreational fishing losses due to the 2002 spill. 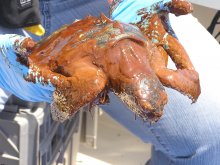 During an oil spill important decisions need to be made fast, so it is critical that experts are equipped with the tools they need to consider all types of marine resources.

This is especially important when it comes to protected species like sea turtles. 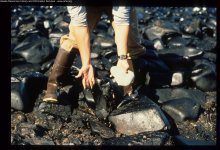 Story Map: The Spills Behind the Oil Pollution Act

Thirty years ago on March 24, 1989, the Exxon Valdez oil spill occurred. It was America's largest oil spill at the time, and is largely credited with the passage of the Oil Pollution Act.

But it was not the only big spill of 1989. Between June 23 and 24, three different oil tankers accidentally poured their cargo into U.S. coastal waters.

NOAA and Ducks Unlimited are teaming up to restore habitat damaged from oil spills and hazardous waste releases. An initial cooperative agreement between the two organizations includes $1.8 million for restoration activities in the Gulf of Mexico, in coordination with the State of Texas.