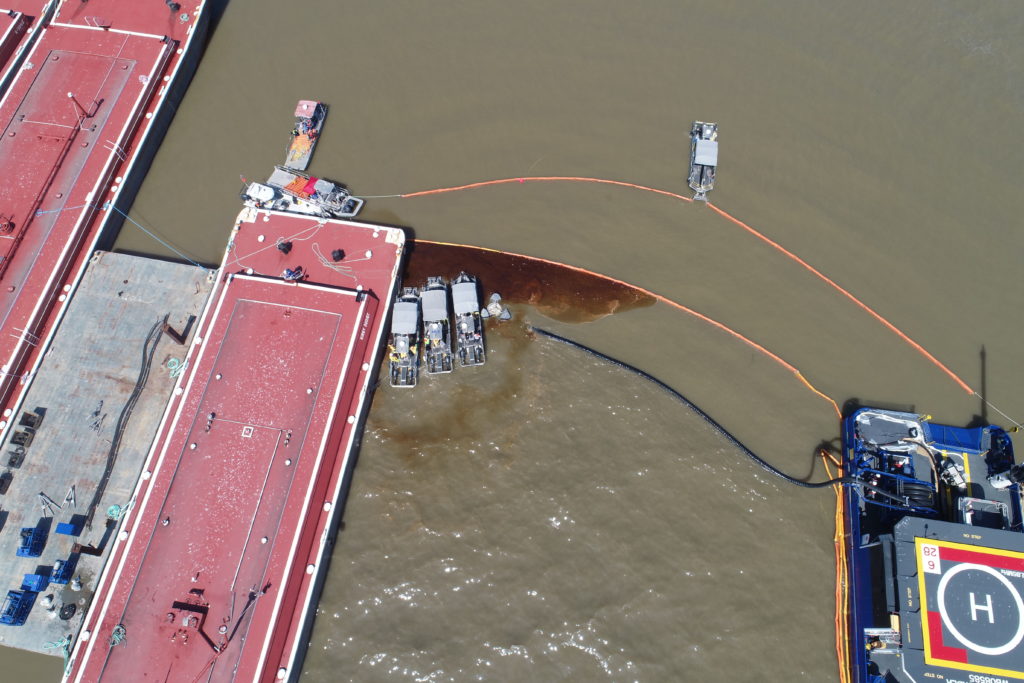 Aerial view of skimmer boats and skimming equipment removing the last of the product around the collision site on the Houston Ship Channel on May 14, 2019 (Credit: USCG).

$2.1 million Proposed for Restoration at the Bayport Channel Oil Spill Site in Texas

On July 19, 2021 the Department of Justice announced filing for public comment of a consent decree proposing a $2.1 million settlement value to restore for natural resource damages for the Bayport Channel oil spill.

The settlement will go toward resolving natural resource damage claims and restoring habitats impacted by the spill.

On May 10, 2019, an estimated 599,676 gallons of oil in the form of a gasoline blending stock known as reformate was discharged from tank barge 30015T during a collision with the tanker ship Genesis River near Bayport, Texas.

The bow of the Genesis River cut through the hull of the barge and ruptured the barge’s storage tanks. Oil discharged from the barge into the waterway and polluted parts of the Ship Channel, Galveston Bay, and the Texas coastline.

Following the spill, NOAA and co-trustees worked with the responsible party to cooperatively assess natural resource damages arising from the spill. The Trustees identified several categories of impacted and potentially impacted resources, including marine mammals, fish, invertebrates, oysters, shoreline and subtidal habitats, and water column, as well as effects to human use/recreation.

The proposed Consent Decree is available for public comment through August 19, 2021 and can be submitted on the U.S Department of Justice website.