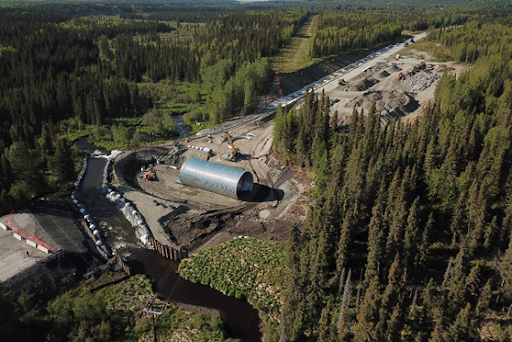 NOAA invests in the environment—and communities. We use our scientific expertise, and funding from pollution settlements, to restore habitats impacted by oil spills and hazardous waste releases. In turn, restoration helps communities who rely on the resources and services habitats provide.

Settlements after pollution events can provide opportunities to fund restoration. Restoration comes in many forms, and is designed to help the environment recover, and restore recreational opportunities like fishing and boating. Some projects rebuild wetlands, estuaries or coral reefs. In the efforts described below, NOAA and partners removed dams and other barriers to reconnect important river habitats. These projects are allowing fish to pass during all life stages, returning natural river hydrology, and, in some cases, helping prevent local flooding damage and removing safety hazards.

Dozens of Barriers to Fish Passage Removed in Alaska

In 1989 the  Exxon Valdez oil spill disaster led to the establishment of the Oil Pollution Act of 1990 and NOAA’s program for holding polluters accountable for restoration after oil spills. The spill released almost 11 million gallons of oil into Alaska's pristine Prince William Sound, injuring many types of animals, plants, and marine habitats. It also devastated local economies and families dependent on viable fisheries and a healthy ecosystem. Restoration of areas affected by the spill continues today.

Among many Exxon Valdez restoration efforts, NOAA and partners at the U.S. Fish and Wildlife Service and the State of Alaska invested over $20 million in settlement funding since 2016 to restore fish passage in areas affected by the spill. NOAA has worked with community partners in Kodiak, Kenai Peninsula, and Cordova to remove more than 25 barriers to fish passage and restore access to high-value spawning and rearing habitats valuable to Pacific salmon populations above the barriers. In these projects over 70 miles of river habitat will be opened up. Additionally, the restoration supports local communities who rely on salmon for recreational, subsistence, and commercial fishing.

The Raritan-Millstone Watershed in New Jersey, is home to over twenty polluted Superfund sites. The U.S. Environmental Protection Agency has designated these areas as clean up priorities because they are contaminated by hazardous waste releases. Natural resources damages settlements for two of these sites, American Cyanamid and Cornell-Dubilier, contributed to a much broader watershed fish passage restoration effort. These settlements, and other sources, including state and NOAA Community-based Restoration funds, are leveraging investments in dam removals and feasibility studies to help jump start others.

Many dams in the watershed no longer serve their historical purposes and block fish passage to upstream spawning habitat—several have blocked fish passage for over 250 years! NOAA is working with partners through the Raritan River Fish Passage Initiative to identify and implement barrier removal projects in the watershed. The projects are opening up streams and rivers to help migratory fish including Shad, river herring, and American eel reach their habitats. These species are important prey to fish and other wildlife up the food chain, so if populations are healthy, they have a positive ripple effect on ecosystems relying on them.

Overall, this proactive effort has led to six dam removals, including the Weston Mill Dam. Nine additional dam removal projects are in the works. Collectively, NOAA and our partners anticipate more than 100 miles of streams will be opened to fish passage when the initiative reaches its conclusion.

The Program was established after the 1989 Exxon Valdez oil spill in Alaska. Since then, we have been working to restore areas impacted by oil spills, hazardous releases and ship grounding incidents in communities across the nation.

NOAA responds to more than 150 pollution incidents each year. We join teams of state, tribal, and federal agencies to respond to incidents, assess damaged resources, hold polluters accountable, and eventually restore the environment and improve the quality of life for the communities that were impacted. To date, NOAA and agency partners have recovered more than $10 billion for restoration.