While traveling through the Aleutian Islands, the M/V Selendang Ayu experienced engine trouble. On December 8, 2004, the vessel grounded in rough seas off Unalaska Island, Alaska and broke in half. The rupture resulted in the release of about 350,000 gallons of oil and diesel, as well as 132 million pounds of soybeans.

Resource impacts from the spill included the following:

NOAA is working with co-trusteesGovernment officials acting on behalf of the public when there is injury to, destruction of, loss of, or threat to natural resources. to complete a natural resource damage assessment. Starting in 2004 the trustees worked cooperatively with the Responsible PartyThe individuals, companies, or government agencies responsible for an oil spill, hazardous substance release, or ship grounding incident. to carry out studies of injuries to natural resources and services. The cooperative agreement was terminated after the Responsible Party reached their limit of liability. As injury quantification and restoration planning have not been completed the trustees are seeking funding from the National Pollution Funds Center to complete the injury assessment and restoration plan. Once the restoration plan is complete, the Trustees will seek funding for restoration implementation. 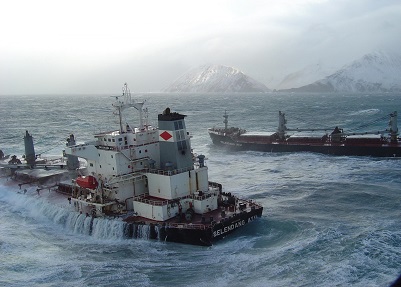 The vessel broke in two, releasing about 350,000 of petroleum fuel and marine diesel. 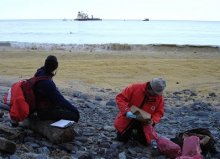