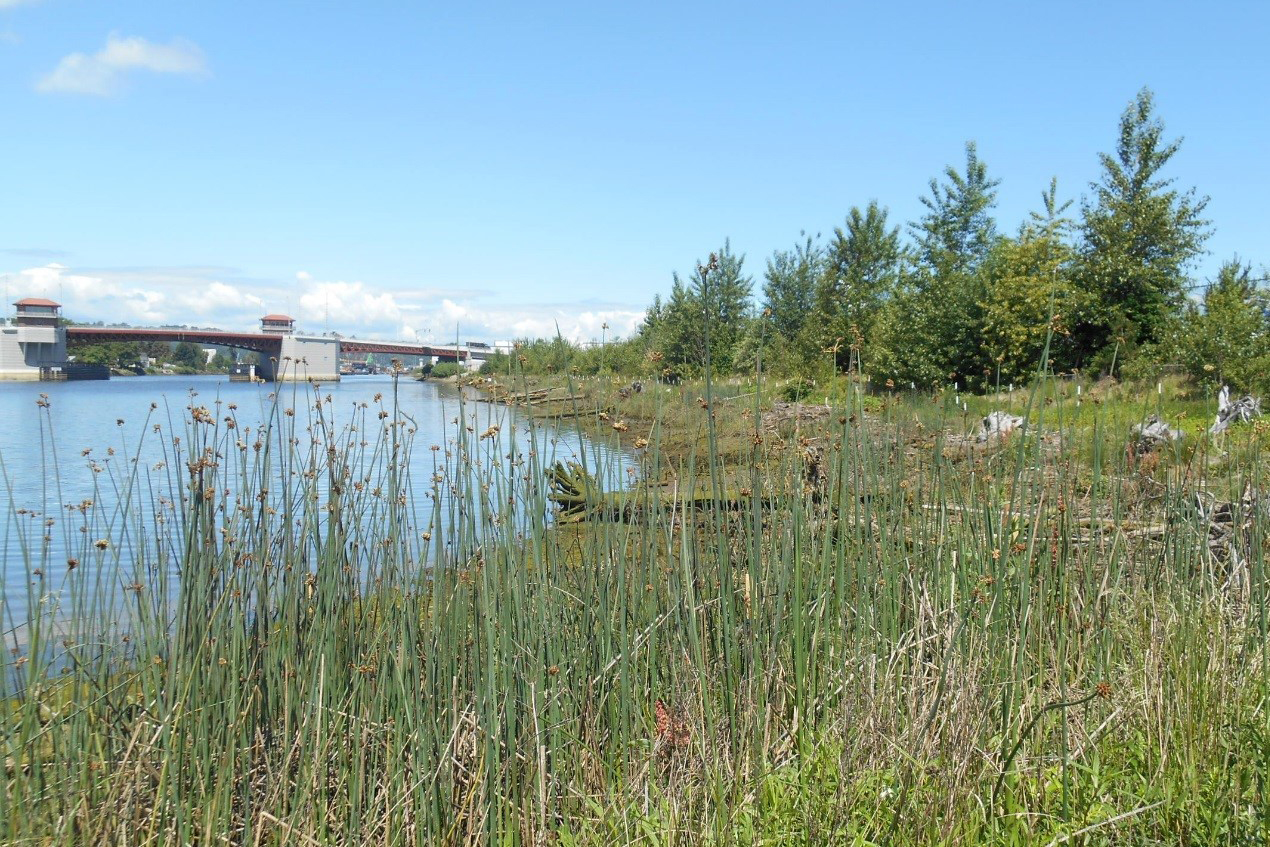 In 2014, the Boeing Company created one of the largest restoration sites on Seattle’s Lower Duwamish River as part of a natural resource damage assessment (NRDA) settlement. The project added marsh, mudflat, and riparian vegetation to nearly five acres of land, providing important habitat for fish and wildlife. In September, the Boeing Company broke ground on a new restoration effort along the Lower Duwamish River: installation of large woody debris, which helps improve habitat conditions and stabilizes shorelines.

The Duwamish River was once a wide, meandering river with large areas of mudflats and marshes. By the 1940s, channelization and filling had transformed the 9-mile wandering river and estuary into a 7-mile industrial waterway, destroying 97 percent of the original habitat in the process. The Lower Duwamish River is still highly developed, with many industrial and commercial facilities lining its banks. Hazardous substances have been released into the river since the early 1900s, resulting in injuries to fish, birds, wildlife, marine mammals, and their habitats.

The nearly 5 acres of habitat previously created by the Boeing Company have been key to restoring injuries to these resources. The marshes and mudflats create areas where migrating salmon—especially juveniles—can rest and feed on their journeys out to sea, and find refuge from predators. Riparian buffers with native vegetation help filter pollutants from nearby industrial areas and keep them out of the river.

Boeing recently submitted a 5-year monitoring report (PDF, 109 pages) to the Elliott Bay Trustee Council, which oversees the Lower Duwamish River NRDA. The report illustrates the many successes of the restoration site. Plant cover, a measure of the amount of vegetation on the ground, has either remained stable or increased in both the marsh areas and riparian areas. Fish species such as chum salmon, Chinook salmon, starry flounder, threespine stickleback, shiner perch, snake prickleback, and staghorn sculpin have been observed using the site. In addition, adaptive management has been and will continue to be used at the site to address the ongoing challenges of invasive plant species and geese overfeeding on newly-planted vegetation. This will help maintain the growth of native plant species in both marsh and riparian areas.

The new large woody debris Boeing Company installed at the site will create additional complexity in the river, benefitting native salmon species. Large woody debris helps form pools in streams, increase bank stability, and maintain sediments in the river that are important for salmon. This habitat complexity provides areas for juvenile salmon and other species to seek refuge and forage on their journey out to sea. NOAA and the other Elliott Bay trustees look forward to continuing to work with Boeing as this project develops.