On November 26, 2004, the M/T Athos I hit several submerged objects in the Delaware River while preparing to dock at a refinery in Paulsboro, New Jersey. A nine-ton anchor punctured the vessel’s bottom, releasing nearly 265,000 gallons of crude oil into the Delaware River and nearby tributaries.

Oil from the ruptured tanker spread 115 miles downriver, impacting 280 miles of shoreline in Pennsylvania, New Jersey, and Delaware. NOAA worked with other trustees Government officials acting on behalf of the public when there is injury to, destruction of, loss of, or threat to natural resources. to assess the impacts of the spill. We identified injuries to shoreline habitats, birds, and benthic habitat. Recreational uses were affected as well, with negative effects on boating, fishing, and hunting. The incident also forced the U.S. Coast Guard to close the Delaware River to commercial traffic for more than a week.

In early 2020, NOAA and natural resource Trustees in the M/T Athos I oil spill case released a final amendment to their 2009 restoration plan after releasing a draft for public comment in December 2019. The amendment (PDF, 12 pages) replaces one recreational project, a boat ramp, with another boat ramp project at a different location that would help achieve substantial recreational access to the Delaware River.

In 2010, the trustees received $27.5 million for ten restoration projects listed in the 2009 restoration plan (PDF, 263 pages) designed to benefit the environment, coastal communities, and economy in the Delaware River watershed. Details on each project can be found in the Restoration Plan.

Many of these habitat restoration efforts are completed or underway and they aim to create or restore almost 400 acres of different habitat in Pennsylvania, New Jersey and Delaware. 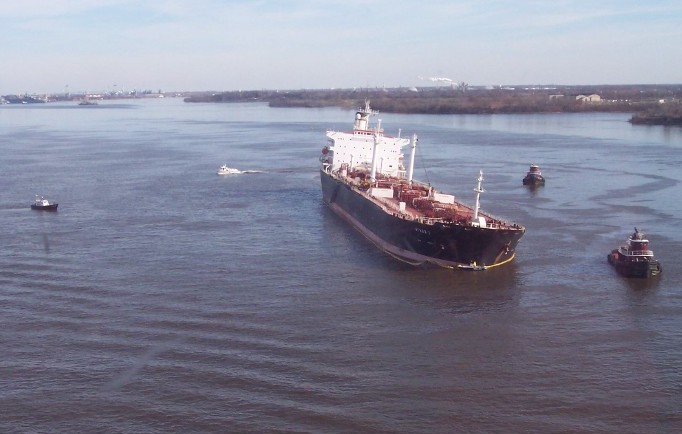 Athos I lists to starboard the day after the spill began.

“In the Darby Creek Restoration Project the removal of three dams opened more than 2.7 miles of habitat for a range of resident and migratory fish. Shad and river herring species once supported the largest and most important commercial and recreational fisheries on the Atlantic Coast. This restoration benefits fish, wildlife, anglers, and others who value robust natural habitats.”

ORR Blog: Before Breaking Ground for Restoration, Digging for Signs of the Past. November 2014.
ORR Blog: Bringing Urban Waterfronts Back to Life: Philadelphia Edition. May 2012.
ORR Blog: Oil Spills and the Holidays: Black Friday Takes a New Meaning. November 2011.