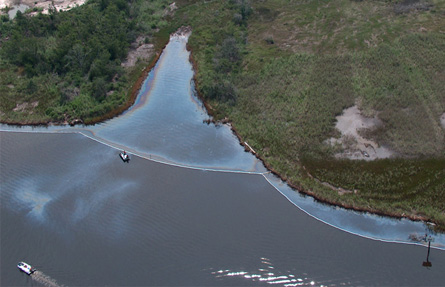 Federal and state trustees for the Citgo Refinery Calcasieu River oil spill in Louisiana have been working jointly to plan and design restoration projects. On October 20, 2021 they released a Draft Restoration Plan and Environmental Assessment (PDF, 132 pages) that analyzes a range of alternatives to restore injured resources to compensate for the injuries caused by the 2006 spill. The trustees are seeking public comments on the Draft Restoration Plan for 30 days through November 20, 2021.

The spill contaminated over 150 miles of shoreline, including beaches, residential and industrial waterfront, and marsh. In this Draft Restoration Plan, the trustees preferred restoration alternatives aim to restore approximately 432 acres of habitat near the Calcasieu estuary to compensate for injuries to shoreline habitats, oysters, and birds.

Details on the Proposed Projects

The Long Point Bayou Marsh Creation Project would provide for the creation and enhancement of approximately 392 acres of saline marsh, including tidal creeks, in shallow open water in Cameron Parish, Louisiana. This project would partially compensate for ecological services related to marsh and shoreline habitats, as well as suitable nesting and foraging habitat for birds injured during the incident.

The Calcasieu Lake Oyster Cultch Plant Project would provide for the creation of approximately 18 acres of oyster reef habitat in Cameron Parish, Louisiana. Healthy reefs serve as extremely valuable forage and nursery habitat for many of the important recreational and commercial species of finfish and invertebrates, and other water column organisms injured during the incident. The project proposes creating substrate for oyster spat to settle and grow on that will develop into an oyster reef providing important invertebrate and fish habitat.

The Houma Navigation Canal Bird Island Project would provide for the creation of suitable nesting habitat for coastal island nesting birds in Terrebonne Bay, Terrebonne Parish, Louisiana, to compensate for the injury to birds during the spill. The Bird Island Project would enlarge a bird nesting island located about four miles southeast of Cocodrie that is currently being designed for the Deepwater Horizon oil spill case. The project is designed to enlarge the island from its current size of 32 acres to approximately 50 acres by importing dredged sediment from a nearby suitable sand source and placing it adjacent and onto the existing island. The Calcasieu River case trustees would partner with the Deepwater Horizon trustees and add to or offset a portion of the project construction costs.

How to Submit Comments

To submit comments via email, please send them to Charles K. Armbruster at (225) 925-6606 or by email at charles.armbruster@la.gov with the Louisiana Oil Spill Coordinator’s Office, with the subject line “Calcasieu River Oil Spill Draft Damage Assessment and Restoration Plan and Environmental Assessment”

To submit comments via mail, please mail them to

Requests for hard copies of the draft plan should be submitted to the email or mailing address above before the November 20, 2021 comment deadline.

Background on the 2006 Oil Spill

The Citgo Refinery Calcasieu River spill occurred on June 19, 2006 in Lake Charles, Louisiana when approximately 21 million gallons of oil waste from storage tanks at the Citgo Refinery wastewater treatment plant spilled into the Calcasieu Estuary. The oily waste discharged from the tanks initially fell into an open-air containment berm but it is estimated that 54,000 barrels of oil wastewater entered the Calcasieu Estuary, causing damage to the adjacent environment and economy.

On August 31, 2021, the Department of Justice entered a Consent Decree valued at $19.69 million, to resolve federal and state claims for natural resource damages associated with the spill. The case Trustees will use most of these funds to support the restoration projects described above.