The spill oiled over 80 acres of wetlands and shoreline, killing more than 1,000 birds and animals, including waterfowl, diamondback turtles, and muskrats.The oil also harmed fish and shellfish, and resulted in the loss of an estimated 125,000 river trips by fishermen and recreational boaters.

The 2002 Restoration Plan called for two additional recreational access projects in the vicinity of the oil spill but these originally planned projects proved infeasible due to input from local communities and government partners. The trustees have identified an alternative project to compensate for lost recreational use. The alternative project was provided to the public for comment in the October 2018 Draft Amendment to the 2002 Restoration Plan. It proposed to construct a boardwalk and pier at Jefferson Patterson Park.

The Final Amendment to the 2002 Restoration Plan was approved in Janurary 2019. The Jefferson Patterson Park Pier and Boardwalk Project would provide a new publicly accessible pier to replace an existing pier destroyed by Hurricane Isabel in 2003 as well as a boardwalk. The trustees will allocate $350,000 to implement the proposed project. 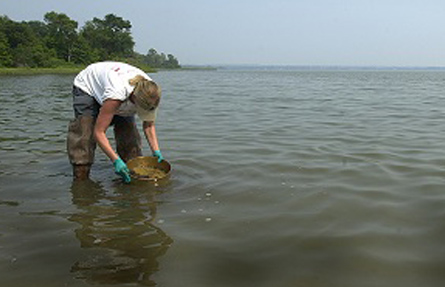 After the Chalk Point oil spill in Maryland in 2000, a NOAA scientist samples sediment to determine the impact on bottom-dwelling creatures.

“The restoration process is nearly complete at this time, and the area affected by the spill has shown itself to be very resilient. Once we have implemented additional projects to enhance recreational access, the public will be fully compensated for losses from the spill.”