On March 4, 1999, an American Transport, Inc. tanker truck jackknifed on State Route 26. The truck spilled 5,388 gallons of unleaded gasoline onto the reservation of the Confederated Tribes of the Warm Springs Reservation of Oregon. Most of the spilled fuel flowed overland into Beaver Butte Creek just above its confluence with Beaver Creek, a tributary to the Warm Springs River.

The spill affected an important spawning and rearing area for migratory fish in Beaver Creek. Thousands of fish were killed, including Chinook salmon and steelhead. In addition, juvenile Chinook salmon and steelhead which survived the initial impact of the spill were impacted indirectly. They suffered reduced growth and survival due to a reduction in insects, their primary food source.

Many other natural resources were injured as a result of the spill, including surface water, riparian habitat, resident fish, amphibians, and the benthic communityOrganisms that live in and on the bottom of the ocean floor.. The spill likely also had negative impacts on cultural resources, as well as recreational, ceremonial, and subsistence fishing.

We reached a settlement with the responsible party in 2006, and finalized a restoration plan in 2009.

Restoration began in 2011. Highlights from completed projects are described below. Long term monitoring at these projects is ongoing. 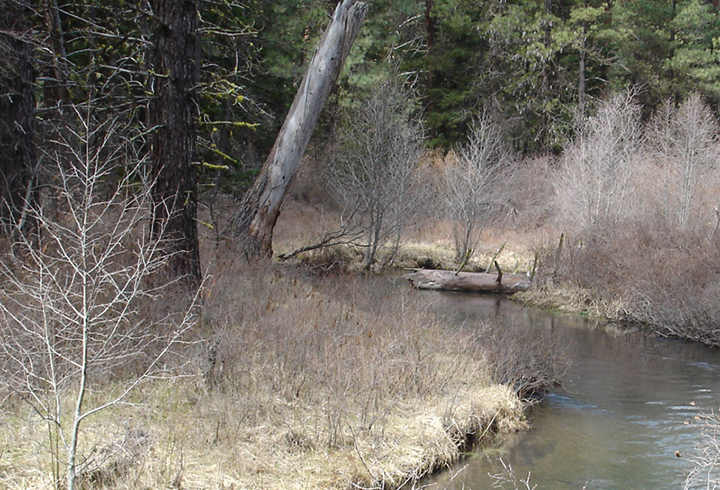 Areas like this in Beaver Creek watershed need more trees and other large woody debris to provide habitat for fish. Credit: NOAA

"The secure funding from the spill settlement has allowed the Tribe to leverage additional funding along with the necessary technical support from the Natural Resources Conservation Service to ensure engineering standards are met. Supplemental funding was provided through the Tribes Bonneville Power Administration Funded Habitat Restoration Program on the Reservation."

Confederated Tribes of the Warm Springs Reservation of Oregon
National Oceanic and Atmospheric Administration
U.S. Department of the Interior

NOAA Blog - Transforming an Oregon Watershed, Once Marred by a Gasoline Spill, into Fish-Friendly Habitat