From 1964 to 1997, on the shores of Swan Lake and Galveston Bay, the Malone Services Company operated a reclamation, storage and disposal facility for waste oils, chemicals, and hazardous wastes. During its operation, hundreds of businesses sent more than 480 million gallons of organic and inorganic waste to the facility. Wastes were stored in two earthen, unlined pits which released contaminants to the groundwater within the site, and runoff into surface waters. Designated a Superfund siteAn uncontrolled or abandoned place where hazardous waste is located, possibly affecting local ecosystems or people. Sites are listed on the National Priorities List for evaluation and cleanup by the U.S. Environmental Protection Agency. in 2001, cleanup activities began here in 2014, and are ongoing.

Galveston Bay is the 7th largest estuary in the United States. It is also part of the National Estuary Program, which promotes and protects the nation’s most sensitive coastal ecosystems. The surface waters of Swan Lake and the surrounding wetlands are home to commercial and recreational fisheries, as well as endangered species of sea turtles. The area provides fishery habitat for spawning and rearing, as well as for feeding and migration for adult fish.

In September 2012, NOAA, the State of Texas, and federal TrusteesGovernment officials acting on behalf of the public when there is injury to, destruction of, loss of, or threat to natural resources., reached a settlement with the 27 responsible partiesThe individuals, companies, or government agencies responsible for an oil spill, hazardous substance release, or ship grounding incident. for approximately $3.1 million.  In July 2015, the Trustees finalized the damage assessment and restoration plan (PDF, 114 pages) which  proposed that settlement funds from the Malone Service Company would fund restoration of approximately 38 acres of intertidal saltwater marsh in Pierce Marsh, in Galveston Bay. However, other funding became available for the project, so the Malone Service Company settlement funds were used to restore only 28 acres. A balance of roughly 10 acres were saved for future restoration to fulfill their responsibility.

On February 9, 2022, the Trustees released a Final Supplement (PDF, 27 pages) to the July 2015 Final Restoration Plan, which describes The Swan Lake Marsh creation project. Restoration at Swan Lake Marsh will be implemented with combined funds from multiple funding sources to restore approximately 185 acres of tidal marsh habitat at the Site. This project will fulfill the roughly 10 acre balance and deliver all of the restoration called for in the 2012 Consent Decree (PDF, 30 pages) to  provide ecological services similar to those of a natural brackish marsh by increasing tidal exchange and the benthic productivity of the project area. 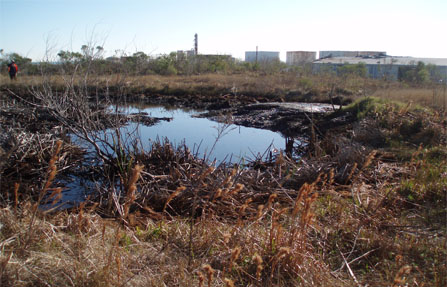 Oil pits dominated the Malone site prior to the cleanup.

Upon implementation, the projects selected in the Final Restoration Plan will make the public whole for the natural resources damaged at the Malone site. While each project is outstanding in its own right, together, these projects leverage previous and ongoing restoration efforts by restoration partners and will contribute to landscape scale restoration in Galveston Bay.