The site was declared an EPA Superfund siteAn uncontrolled or abandoned place where hazardous waste is located, possibly affecting local ecosystems or people. Sites are listed on the National Priorities List for evaluation and cleanup by the U.S. Environmental Protection Agency. in 1998.

The Environmental Protection Agency cleaned up the facility and related properties, addressing the source of contamination and preventing the threat of potential site and off-site contamination to public health and the environment. NOAA and the other trusteeGovernment officials acting on behalf of the public when there is injury to, destruction of, loss of, or threat to natural resources. agencies were involved in the development of remedial actions for the contaminated Swan Lake salt marsh. These actions included a breakwater installation to prevent shoreline erosion, providing protection to ecological receptors in the marsh area and Swan Lake by preventing potential releases of contaminated sediments to the environment.

Hazardous substances such as trace metals—including aluminum, arsenic, barium, lead, and mercury—were released at the site along with PAHspolycyclic aromatic hydrocarbons; a group of organic contaminants that are often the byproducts of petroleum processing or combustion. Many are toxic to aquatic life and several are suspected of causing cancer in humans.. Historical operations and waste disposal practices contaminated soil, sediment and groundwater with hazardous chemicals. The hazardous substances were found in the sediments of a dredged canal, the Swan Lake delta, and salt marsh. Trace metals do not degrade naturally in marine sediments and persist at harmful levels long after the primary source of pollution is removed.

The Swan Lake ecosystem, part of the greater Galveston Bay ecosystem, is an important habitat for many recreational and commercial fish and shellfish, and an important source of organic production for the system.

The key habitats affected by the hazardous releases include benthicorganisms that live in and on the bottom of the ocean floor. and marsh habitats. Some animals living in these habitats—shellfish, fish, and birds—may have suffered increased death, reduced growth, and reduced reproductive rates, according to data developed through feasibility studies and natural resource assessments.

In 2001, NOAA and other trustees completed a final restoration plan and environmental assessment to address injuries to natural resources and services.

An important component of the restoration plan included the construction of 76.7 acres of tidal marsh within the Swan Lake system, which was completed in 2007.

After further consideration and public comment, the restoration plan was expanded in 2015 to include construction of a 70-acre tidal marsh in the nearby Pierce Marsh complex. By leveraging remaining settlement funds from the Tex Tin case with a settlement from another regional case, this project will benefit the entire coastal community. The project will increase shallow bay bottom elevations to levels that will support vegetation and fish. It will be accomplished by material dredged from a nearby Gulf Intracoastal Waterway maintenance project, led by the U.S. Army Corps of Engineers. Construction has begun and is expected to be completed in 2016. 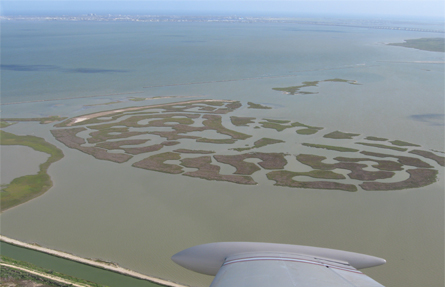 “The opportunity to leverage remaining Tex Tin settlement funds with those from another regional case, and the use of maintenance dredging materials from the Gulf Intracoastal Waterway by the U. S. Army Corps of Engineers, dramatically increases the benefits realized from Trustees’ restoration efforts. The public will be compensated for the injuries to estuarine habitats that resulted from a half-century of contaminant releases during operations at the Tex Tin site, and will gain ecosystem services - from fish and wildlife production, to storm surge mitigation - for the communities around lower Galveston Bay.”