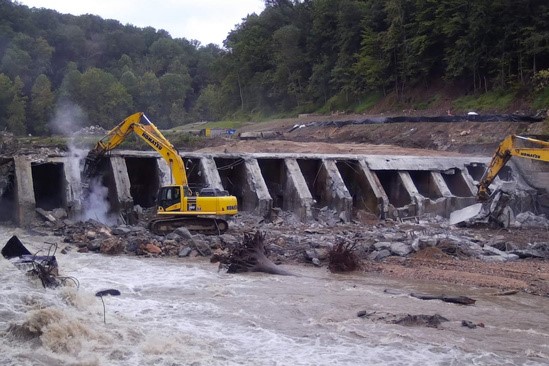 Excavators hammer away at the Bloede Dam shortly after its breach. Credit: Maryland Department of Natural Resources.

Removing Bloede Dam - A Victory 10 Years in the Making

On September 14th, 2018 following ten years of planning between NOAA and project partners, explosives were detonated on the Bloede Dam. Water and rubble shot into the air, and the dam was breached. The Bloede Dam removal is one of the largest and most complicated in NOAA’s history, and a major victory for fish and communities along the Patapsco River in Maryland.

NOAA contributed almost $9 million of the $17 million cost of this project. Over the past 10 years several funding streams were used, including the Community-based Restoration Program, Coastal Ecosystem Resilience program, American Recovery and Reinvestment Act of 2009, and Damage Assessment Remediation and Restoration Program settlement funds resulting from the Spectron hazardous waste site. The remainder of funding came from partners such as the Maryland Department of Natural Resources, U.S. Fish and Wildlife Service, and industry partners.

The dam used to block fish migration between the Patapsco River and Chesapeake Bay. As the Patapsco finds its natural course it will open up more than 65 miles of habitat for fish species like American shad, hickory shad, and alewife. These fish spawn in the river, but spend most of their lives in saltwater. It will also open up 183 miles for American eel, which spawn in saltwater but live in freshwater, to access the greater watershed.

Once the removal is completed the team will begin construction of numerous public works projects. These include a multi-purpose trail, park benches, and environmental education signs. Access to recreational fishing in the Patapsco river will also improve, benefiting local economies.

Bloede is the third dam to be removed on the Patapsco with NOAA’s support. Restoring a river has far-reaching impacts. It benefits the ecosystem as well as the communities and economies around it.

For further information please contact megan.ewald@noaa.gov or view links below for further articles on the Bloede Dam.