Beginning in 1961, a solvent recycling facility here contaminated soils and groundwater with VOCs VOCs/volatile organic compounds—A group of toxic and carcinogenic chemicals frequently found in industrial waste. Injuries to aquatic organisms may occur where groundwater contaminated with VOCs discharges to surface water.. These substances were released into the adjacent Little Elk Creek, which flows into the Elk River, a tributary to the Chesapeake Bay.

EPAU.S. Environmental Protection Agency; federal agency with the mission to protect human health and safeguard the environment. named the property a Superfund siteAn uncontrolled or abandoned place where hazardous waste is located, possibly affecting local ecosystems or people. Sites are listed on the National Priorities List for evaluation and cleanup by the U.S. Environmental Protection Agency. in 1994. The potentially responsible parties The individuals, companies, or government agencies responsible for an oil spill, hazardous substance release, or ship grounding incident.(PRPs) removed contaminated sediments from the creek in 1998, and began operating a groundwater treatment system in 2000. EPA began construction of a thermal groundwater treatment system in March 2015. NOAA has provided technical input throughout EPA’s investigation, assessing risks to fish, aquatic wildlife, and other organisms. We will continue to assist EPA on remaining design issues during implementation, and to ensure that the cleanup is effective via long-term monitoring activities.

NOAA and other trusteesGovernment officials acting on behalf of the public when there is injury to, destruction of, loss of, or threat to natural resources. worked cooperatively with the PRPs to assess injuries to natural resources in Little Elk Creek, based on existing data. We determined that VOC contamination likely had detrimental effects on anadromous fishAn anadromous fish, born in fresh water, spends most of its life in the sea and returns to fresh water to spawn.(such as herring and alewife), benthic communityOrganisms that live in and on the bottom of the ocean floor., and their habitats.

A 2007 settlement provided for cleanup of the site, as well as $455,000 for restoration of anadromous fish and their supporting habitats. A restoration plan was finalized in 2008. However, property access issues prevented implementation of the selected project at Scotchman Creek in the Elk Creek watershed.

In July 2015, the trustees issued a draft amended restoration plan for public comment that would modify the 2008 restoration plan. The amended version proposed to use the settlement funds to assist with the Bloede dam removal on the Patapsco River in Baltimore and Howard Counties, Maryland. Additional funds of $733,391 from NOAA's Community-based Restoration Program were leveraged to finance this restoration.

After receiving public comments, a Final Amended Restoration Plan was approved. On September 14, 2018 dynamite was detonated and the dam breached. As the Patapsco finds its natural course it will open up more than 65 miles of habitat for fish species like American shad, hickory shad, and alewife. It will also open up 183 miles for American eel. 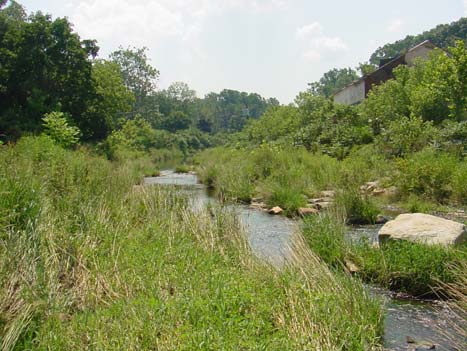 After contamination was removed from the site, stream restoration (shown here) was completed.

“Spawning areas for migratory fish in Maryland have been significantly impacted by fish passage barriers, contaminants, stormwater runoff, watershed development, and other historical and ongoing factors. The natural resource trustees’ work at Spectron provides for restoration of the public’s injured natural resources via a project that will open up historic spawning habitat for migratory fish.”