On January 19, 1996, the tank barge, North Cape, and the tugboat, Scandia, grounded off Moonstone Beach in southwestern Rhode Island, spilling an estimated 828,000 gallons of home heating oil. This spill was the worst in Rhode Island history, with oil spreading throughout a broad area of Block Island Sound and beyond, including shoreline of the Trustom Pond National Wildlife Refuge (NWR).

The spill killed massive numbers of marine animals including 9 million lobster, 150 million surf clam, 4.2 million fish, and over one million pounds of other organisms such as worms, crabs, and mussels.

A 250-square mile area of Block Island Sound was closed to fishing and shellfishing for an extended period following the spill, and 3,300 lost commercial charter-boat trips resulted.

In the coastal salt ponds, one-half million fish, 6.5 million marine worms, amphipods, and more than one million crabs, shrimp, clams, and oyster were killed by the spill.

Additionally, 2,100 marine birds, including 402 loons, died as a result of oiling.

The Trustom Pond NWR contains the only remaining undeveloped coastal salt pond in Rhode Island and is a nesting site for endangered piping plover. The oiling killed as many as 10 piping plover and impaired hatching of piping plover chicks at the refuge.

Settlement funds were secured by the TrusteesGovernment officials acting on behalf of the public when there is injury to, destruction of, loss of, or threat to natural resources. to implement restoration of injury to lobsters. A total of 1.248 million adult female lobsters, caught by hired fishermen, were released through an innovative “v” notching project (see photos). Designed to increase egg production and restore the lobster population, the project was completed in 2006, and resulted in rebuilding the lobster fishery in coastal Rhode Island waters.

The 1999 settlement also provided nearly $8 million for a comprehensive approach to ecosystem restoration.  NOAA and its co-trustees selected a suite of projects with public input to restore natural resources that were injured and to compensate the public for the lost use of resources: 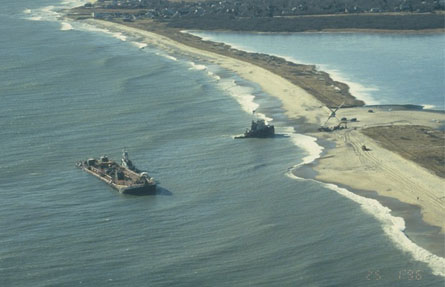 in 1996, the tank barge North Cape and the tugboat Sandia grounded off the coast of Rhode Island resulting in the worst oil spill in the state's history.

"The Trustee agencies with much help from other organizations and volunteers completed a variety of successful restoration projects in coastal Rhode Island and beyond to offset the tragic impacts of the spill."

When North Cape Ran Aground, An Unexpected Career Took Off