On January 1 and 2, 1990, #2 fuel oil spilled from the Exxon Bayway facility’s underwater pipeline in Linden, New Jersey. Approximately 567,000 gallons were released directly into the Arthur Kill, a saltwater channel between New Jersey and Staten Island.

NOAA joined the U.S. Coast Guard on-scene, responding to the spill within hours. Along with other federal, state, and local agencies, we helped to identify resources at risk; conducted overflights, shoreline surveys, and mapping; and recommended appropriate cleanup techniques.

The oil blanketed more than two thousand acres of fish and wildlife habitats, including open water, tidal marshes, and backwater creeks, and over 200 acres of tidal salt marsh on Staten Island and in New Jersey. The oiling smothered fish, crabs, and clams, and caused massive losses of salt marsh cordgrass (Spartina alterniflora) in some wetlands. The oil also directly killed an estimated 700 waterbirds.

In 1991, Exxon Corporation, the owner and operator of the Bayway Linden facility, agreed to pay over $11.5 million in civil damages and criminal penalties during ongoing litigation. NOAA worked with the other trustees to ensure that these funds were used in accordance with the terms of the settlement agreement. To date, 111 acres of marsh habitat have been enhanced or restored, and more than 80 acres have been acquired for protection. Restoration work is ongoing. 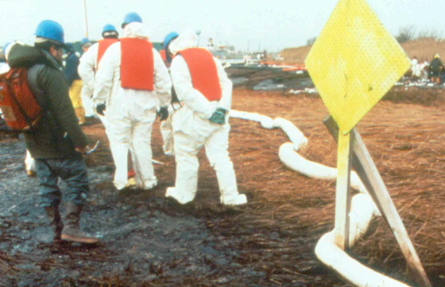 First responders set out oil sorbent pads and boom on Prall’s Island in the days following the spill.

“The Arthur Kill waterway and environs were largely unnoticed until seven species of waterbirds were found nesting on local islands in the 1980s. The backwater of one of America’s largest industrialized corridors  hosts some of the nation’s greatest treasures in the form of a near secret urban wilderness that is impressive in its diversity and natural beauty.“