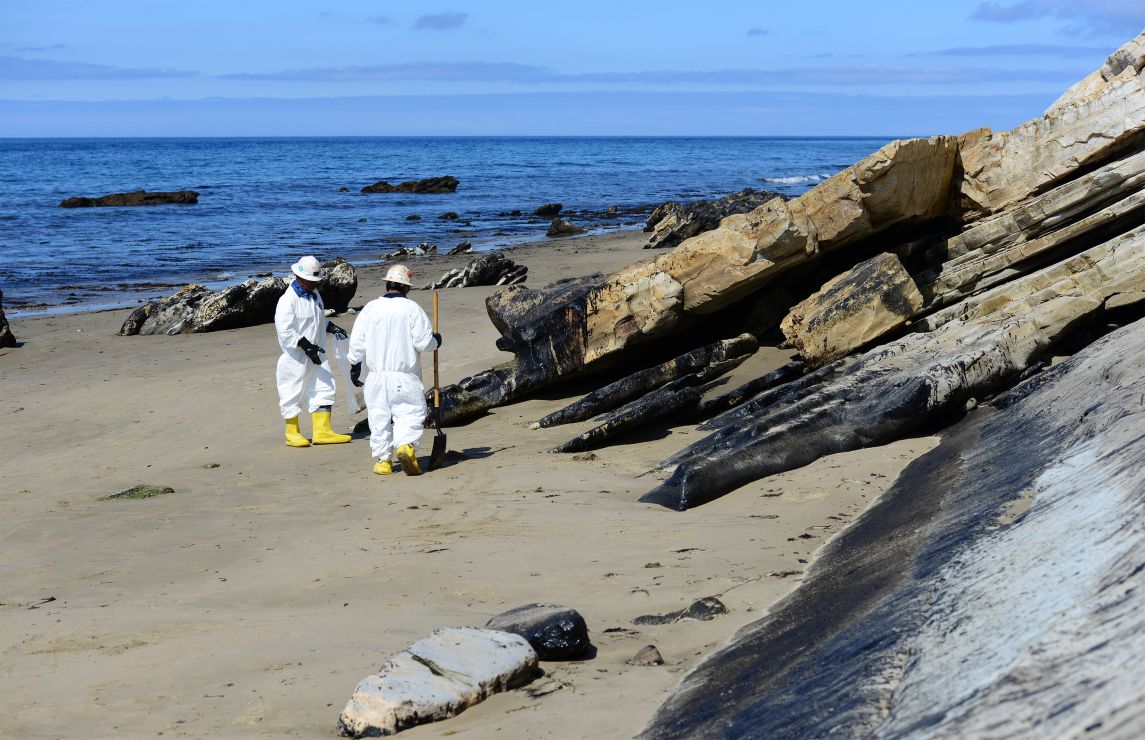 Refugio oil spill response: Two cleanup crew members work to remove oil from the sand along a portion of soiled coastline near Refugio State Beach, on May 23, 2015. (U.S. Coast Guard)

March 13, 2020 - Today the Department of Justice announced filing for public comment of a consent decree proposing a $22.3 million settlement to restore natural resources injured by the Refugio Beach oil spill near Santa Barbara, California in 2015.

The settlement will go toward resolving natural resource damage claims, to restore habitats and wildlife injured by oil, and to compensate the public for lost recreational opportunities. To ensure these restoration projects best benefit communities, economies, and ecosystems, these projects will be selected with public input on a draft restoration plan that is to be released in the near future.

The public is encouraged to review and comment on the proposed consent decree through May 20, 2020.

On May 19, 2015 a pipeline owned and operated by Plains All American Pipeline ruptured near Refugio State Beach, spilling over 120,000 gallons of crude oil on land. Approximately 50,000 gallons of this crude oil ran down a storm drain, into a ravine unde the freeway, and spilled into the ocean.

“We are pleased to join this agreement with industry and our co-trustees to help restore vital habitats, wildlife and recreational areas injured by this oil spill,” said Nicole LeBoeuf, acting director of NOAA's National Ocean Service.  “Local communities and economies depend on these ecosystems, and we look forward to working with the public on projects to restore them to health.”

This proposed settlement marks a major accomplishment for communities, economies, and natural resources impacted by the Refugio Beach oil spill.

The Department of Justice press release from 3/13/2020 can be viewed online.

The settlement is subject to a public commenting period that closes on May 20, 2020.  The consent decree is available online on the Department of Justice Website.