EPA worked together with the Wisconsin Department of Natural Resources and some of the potentially responsible parties to clean up the contaminants. NOAA provided technical expertise to assist the effort. Cleanup activities took decades to complete, concluding in 2013.

NOAA and other trustees also assessed injuries to natural resources from contaminants at the site and identified restoration projects that would compensate the public for these injuries.

Since 1979, high PCB levels have prompted the State of Wisconsin to advise against consumption of all resident fish species, and recommend limited consumption of other species, between Sheboygan Falls and the mouth of the Sheboygan River. Ecological and biological injuries also occurred due to the adverse effects of contaminants on sediment, soil, invertebrates, fish, reptiles, amphibians, birds, and mammals in the vicinity.

On March 30, 2018, the Sheboygan River and Harbor federal and state natural resource Trustees released a Final Damage Assessment and Restoration Plan (PDF, 130 pages). The draft of the plan was released for public comment in December 2017.

In April 2020, the Trustees released a draft supplement to their March 2018 Restoration Plan for public comment. In July 2020, The Trustees approved $801,000 to fund five habitat restoration and recreation projects in areas impacted by hazardous waste there. The projects were included in a final supplement to the 2018 plan, The projects will help restore wetlands, river and upland habitats, and enhance recreational uses within the Sheboygan River Basin. 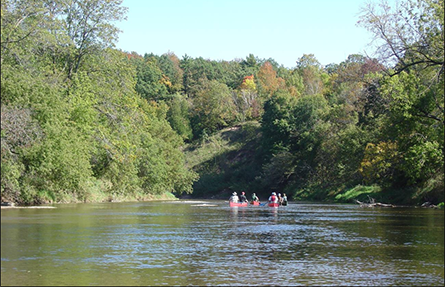 Canoeing the Sheboygan River in the fall. (Deb Beyer, University of Wisconsin)

"People have largely avoided the Sheboygan River for decades because of the contamination. Restoring the river returns a sense of pride and ownership in the community. People are again appreciating the river and the wildlife it supports."

As Assessment Phase Comes to a Close, OR&R Scientist Looks Back on Nearly a Decade of Work on Sheboygan River and Harbor Superfu
Trustees Seek Comments on Project to Protect Unique Habitat in Wisconsin
Déjà vu on the Sheboygan River: Transitioning from Cleanup to Restoration in Wisconsin