Beginning in 1919, Raymark Industries, Inc. manufactured automotive parts at a 34-acre property along the Housatonic River estuary. Raymark initially disposed of manufacturing wastes on-site, but waste materials were also released to Ferry Creek via a culvert from on-site waste lagoons. Lagoon waste sludge was also used as fill on multiple residential, commercial, and municipal properties in Stratford, and in several wetland sites draining to the Housatonic River. This contaminated waste included PCBspolychlorinated biphenyls; a class of chemicals previously used in manufacturing that remain in the environment for many decades, accumulate in living creatures, and pose health hazards to humans, wildlife, and fish., asbestos, lead, and copper. At the Raymark property, VOCs VOCs/volatile organic compounds—A group of toxic and carcinogenic chemicals frequently found in industrial waste. Injuries to aquatic organisms may occur where groundwater contaminated with VOCs discharges to surface water. were also identified as a primary soil contaminant.

Operations at the site ended in 1989, and the area was designated as a Superfund siteAn uncontrolled or abandoned place where hazardous waste is located, possibly affecting local ecosystems or people. Sites are listed on the National Priorities List for evaluation and cleanup by the U.S. Environmental Protection Agency. in 1995. All on-site cleanup was completed by 1997, and the property was later redeveloped as a shopping center. Many of the other contaminated residential and municipal properties were remediated by soil excavation and removal and capping with clean soils. Work to address the remaining off-site contamination is ongoing.

What Are the Impacts?

PCBs and other contaminants from Raymark’s waste continue to present significant risk to fish and other aquatic wildlife in both Ferry Creek and the Housatonic River estuary. Groundwater in the area of the former facility is also contaminated with heavy metals, VOCs, and SVOCs semi-volatile organic compounds; a group of hazardous chemicals that accumulate in sediments and living creatures; PCBs, dioxins, and some pesticides are SVOCs..

Oysters are cultivated in the Housatonic River estuary near some of Raymark's historic disposal sites, and crabs and clams are also collected by recreational harvesters in this area. A current state public health message warns that people can be exposed to site-related contaminants by eating or being in contact with contaminated fish and shellfish from the affected area.

Projects in the plan focus on salt marsh restoration in Stewart B. McKinney National Wildlife Refuge, Great Meadows Marsh Unit. We are combining bankruptcy proceeds from the Raymark Industries site with funds from the settlement for the Lordship Point Superfund Site, also in Stratford, plus funds from the Housatonic River settlement to leverage more than $1 million for restoration and Trustee-oversight. The Final Plan is available on the DIVER Administrative Record site. 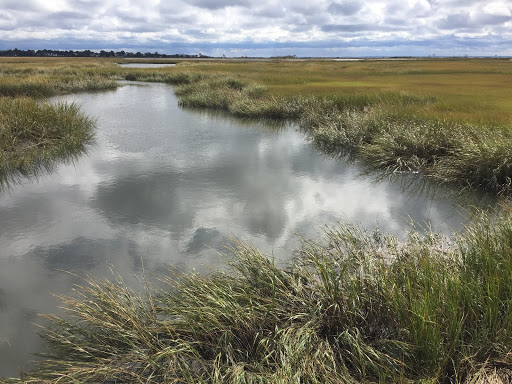 "Restoring salt marsh habitat will benefit a variety of fish and wildlife species using the coastal waters in and near Stratford."