Hazardous substances were released from the Wyckoff Company wood treatment facility and a shipyard beginning early in the 20th century. Released contaminants included PAHspolycyclic aromatic hydrocarbons; a group of organic contaminants that are often the byproducts of petroleum processing or combustion. Many are toxic to aquatic life and several are suspected of causing cancer in humans., mercury, and heavy metals. In 1987, EPA U.S. Environmental Protection Agency; federal agency with the mission to protect human health and safeguard the environment. listed the area as a Superfund siteAn uncontrolled or abandoned place where hazardous waste is located, possibly affecting local ecosystems or people. Sites are listed on the National Priorities List for evaluation and cleanup by the U.S. Environmental Protection Agency. due to contamination in groundwater, soils, and sediments.

NOAA provided technical assistance to EPA throughout the cleanup, which included capping of approximately 60 acres in Eagle Harbor.

Approximately 500 acres of Eagle Harbor were contaminated by releases of hazardous substances. The levels of these contaminants were high enough in sediments to make them toxic to bottom-dwelling organisms. Consumption advisoriesFederal, state, or local government recommendations to avoid eating a certain fish or shellfish because it is unsafe due to high levels of contamination. recommending against eating seafood from Eagle Harbor have been in effect since 1985.

A settlement was reached in 1994 for the cleanup, and in 2004 NOAA and trusteesGovernment officials acting on behalf of the public when there is injury to, destruction of, loss of, or threat to natural resources. received funds to restore habitat in the impacted area. A final Restoration Plan was approved in 2009.

Settlement funds were used to restore and create valuable nearshore habitats. These areas will directly benefit many species, including the Puget Sound chinook salmon and steelhead trout, both listed as threatened under the Endangered Species Act.

Although the cleanup of contamination within Eagle Harbor is complete, EPA is currently considering supplementary cleanup actions outside of Eagle Harbor. NOAA is providing technical input to aid EPA in this evaluation.

"These three restoration sites will benefit fishery resources that were affected from Wyckoff contaminant releases, and were successfully constructed using a strategic combination of settlement funds, partnerships, and grants." 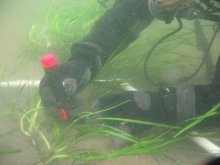