On June 21, 2012, the small freighter M/V Jireh ran aground on Mona Island, Puerto Rico. The island is uninhabited and designated as an ecological reserve. After removing most of the fuel onboard, the U.S. Coast Guard determined that the vessel needed to be removed because the vessel and remaining fuel onboard threatened the surrounding environment. The M/V Jireh was cut into sections and removed piece by piece. Salvage operations lasted several months, and the last piece of the vessel was removed in October, 2012.

NOAA worked with other trusteesGovernment officials acting on behalf of the public when there is injury to, destruction of, loss of, or threat to natural resources. to minimize additional injuries during the removal. We also assessed impacts to corals at the site of the grounding. Approximately 1,000 corals were removed during the response to prevent damage from anchors and cables. An additional 900 corals that were damaged during the response were reattached after the vessel was removed.

The majority of injuries to the reef environment were caused by the anchors and cables used during salvage operations. Several species of coral were impacted, including five listed as threatened under the Endangered Species Act.

NOAA continues to monitor the survival of the reattached corals. 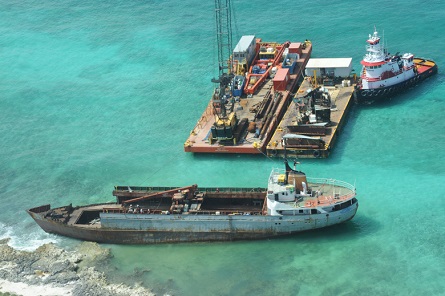 Response barges are anchored near the M/V Jireh. (USCG)

“Cooperation with other agencies and continued monitoring of the site helps protect the threatened coral species that are essential to these sensitive ecosystems.” 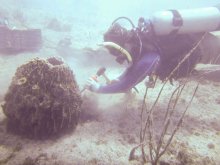