EPAU.S. Environmental Protection Agency; federal agency with the mission to protect human health and safeguard the environment. designated the area a Superfund siteAn uncontrolled or abandoned place where hazardous waste is located, possibly affecting local ecosystems or people. Sites are listed on the National Priorities List for evaluation and cleanup by the U.S. Environmental Protection Agency. in 1989. Cleanup measures were implemented, including containment of toxic wastes and collection and treatment of landfill leachate. A monitoring system is in place to assess whether polluted groundwater poses an ongoing threat to surface waters.

The leachate from Rose Hill Landfill injured fish, wildlife, and their habitats in Mitchell Brook, the Saugatucket River, and Saugatucket Pond. Iron and hazardous substances were present at levels known to have significant impacts on the reproduction and survival of fish and other aquatic organisms. Contamination in Saugatucket Pond is of particular concern, as this area provides substantial spawning and nursery habitat for migratory alewife and blueback herring, as well as rearing habitat for American eel.

The trusteesGovernment officials acting on behalf of the public when there is injury to, destruction of, loss of, or threat to natural resources. reached settlement with the Towns of South Kingstown and Narragansett in 2002, and the responsible partyThe individuals, companies, or government agencies responsible for an oil spill, hazardous substance release, or ship grounding incident. paid $117,000 in compensation for natural resource injuries.

The restoration plan was finalized in 2012. Two fishways on the Saugatucket River were reconstructed: one at the Main Street Dam in Wakefield (completed in November 2015), and the other at the Palisades Facility Dam in Peace Dale (completed in October 2014). These improved fishways will allow increased numbers of river herring to reach over 300 acres of upstream spawning grounds. As a result, we expect the size of the annual herring run to increase to tens of thousands of fish. 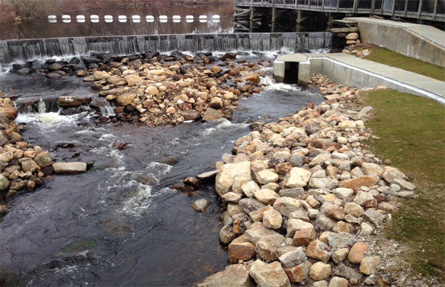 A fishway, or fish ladder, was constructed as part of the restoration effort to help herring travel upstream.

“Injury restoration will bring back tens of thousands of spawning river herring to the Saugatucket River.”