The Quanta Resources Corporation site in Edgewater, NJ, is a former oil and tar storage and recycling facility on approximately 8 acres. The site is adjacent to the lower Hudson River, approximately 9.9 miles upstream of Upper New York Bay. In 1981, the New Jersey Department of Environmental Protection (NJDEP) closed the site after discovering large quantities of polychlorinated biphenyl (PCB)polychlorinated biphenyls; a class of chemicals previously used in manufacturing that remain in the environment for many decades, accumulate in living creatures, and pose health hazards to humans, wildlife, and fish.-laden oil in storage tanks. EPAU.S. Environmental Protection Agency; federal agency with the mission to protect human health and safeguard the environment. designated it as a Superfund siteAn uncontrolled or abandoned place where hazardous waste is located, possibly affecting local ecosystems or people. Sites are listed on the National Priorities List for evaluation and cleanup by the U.S. Environmental Protection Agency. in 2002.

NOAA’s interest, on behalf of the public, is to eliminate site-related contaminants from the adjacent Hudson River and to provide restoration for lost recreational use of impacted natural resources. NOAA currently works closely with EPA recommending studies that assess the extent of the contamination, and we suggest potential remedy measures from that data analysis. There are two study areas, one designated as the mainland or contamination source, and the other is the adjacent Hudson River.

Groundwater and soils contaminants include arsenic, chromium, lead and harmful chemicals, all of which can pose significant threats to human health. A plume of coal tar creosote, (a thick, oily liquid used in roofing and paving that has been classified as a probable carcinogen), exists beneath the site and several adjacent properties, and extends into the Hudson River. This migration of coal tar into the river and below the riverbed is of most concern and consists of the Polycyclic Aromatic Hydrocarbon (PAH)polycyclic aromatic hydrocarbons; a group of organic contaminants that are often the byproducts of petroleum processing or combustion. Many are toxic to aquatic life and several are suspected of causing cancer in humans. group of chemical contaminants. The entire 8-acre mainland source is contaminated along with a range of 3-21 acres of the riverbed. River habitats and aquatic resources potentially impacted include, but are not limited to, the benthic where organisms live in and on the bottom of the ocean floor. riverbed that supports lower food chain species as well as various local and migratory fish.

EPA is now selecting a proposed remedial plan for the mainland source area, and that report will be published in the near future.  The Hudson River area remedy selection is still ongoing, but the remedial objectives will include, but are not limited to, eliminating the visible oily sheen emanating from the creosote and its exposure to humans and aquatic resources, and preventing additional human and ecological contact with site-related contaminants of concern (mainly PAHs) in shallow and deep sediment. NOAA and the other Trustees are awaiting an EPA remedy selection for the Hudson River area before beginning the Natural Resource Damage Assessment (NRDA)Investigation performed by trustees to identify injuries to natural resources caused by oil spills, hazardous substance releases, and grounding incidents in National Marine Sanctuaries, and plan restoration activities. The goal of NRDA is to restore natural resources and compensate the public for lost recreational use. process. 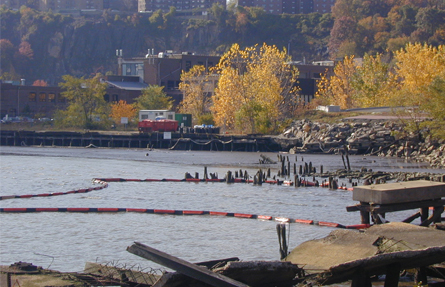 Hudson River shoreline looking south from a location just upriver. Contamination found within and below the river sediments shown in this photo.

“This site is a good example of NOAA and EPA working together with the responsible parties to create a remedy that will attempt to integrate remediation and restoration to abate the site contaminants and reduce future injury to natural resources.”