Manufacturing of dyes, surfactantAbbreviation for a surface-acting agent; a soapy substance used in detergents to reduce the surface tension of water., pesticides, and  other industrial chemicals and products began on the Tremley Point peninsula in Linden, New Jersey as early as 1889. Chlorine gas production, using a process that involved mercury, began here in 1955 and continued through 1985. Wastes and wastewaters emptied directly and indirectly to Piles Creek, South Branch Creek, the Arthur Kill, and their associated tidal wetlands. Mercury, arsenic, other metals, SVOCs semi-volatile organic compounds; a group of hazardous chemicals that accumulate in sediments and living creatures; PCBs, dioxins, and some pesticides are SVOCs., and other toxic substances were released into the surrounding environment.

In 1972, the portion of the peninsula where chlorine manufacturing took place was purchased by Linden Chlorine Products, Inc., a predecessor of LCP Chemicals, Inc. The LCP property was designated a Superfund siteAn uncontrolled or abandoned place where hazardous waste is located, possibly affecting local ecosystems or people. Sites are listed on the National Priorities List for evaluation and cleanup by the U.S. Environmental Protection Agency. in 1998.

Toxic substances from chemical manufacturing at the site contaminated soils, surface water, groundwater, and sediment. Mercury is of particular concern because it has been found at extremely high levels and is distributed widely in sensitive habitats.

The tidal creeks and wetlands in this area support a variety of fish and invertebrates. Exposure to the contaminants in these habitats can cause a range of acute and sub-lethal effects. In addition, consumption of contaminated fish, shellfish, crab, and other organisms from these areas poses a threat to birds and other wildlife, as well as to human health.

EPAU.S. Environmental Protection Agency; federal agency with the mission to protect human health and safeguard the environment. issued a Record of Decision, outlining cleanup requirements for the LCP property, in 2014. NOAA and other trusteesGovernment officials acting on behalf of the public when there is injury to, destruction of, loss of, or threat to natural resources. are providing technical expertise to assure that the design is protective of aquatic life and coastal habitats, and we will continue to assist EPA throughout the cleanup. We are also evaluating natural resource injuries and potential compensatory restoration projects including tidal marsh restoration, land acquisition, conversion of developed areas to natural habitats, and hydrologic reconnection of waterways to allow fish passage. 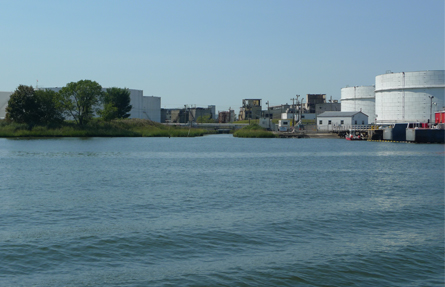 South Branch Creek and Piles Creek are tidal tributaries that discharge to the Arthur Kill, a tidal strait located between New Jersey and Staten Island.

“It’s jaw-dropping to encounter this 100-acre Spartina marsh sandwiched between the Turnpike and the Arthur Kill in the middle of one of the most industrialized parts of New Jersey. Islands of habitat like this one that are surrounded by nothing but industrial development are vital resources to migratory fish and birds, as well as for resident wildlife and the people who live in these communities.”

National Oceanographic and Atmospheric Administration
Department of the Interior