Between 1917 and 1978, Nyanza, Inc. and other companies manufactured textile dyes and other products at this site. Their operations generated large volumes of industrial waste and they contaminated the soil, groundwater and wetlands of the Sudbury River. Mercury, chromium, arsenic, lead and organic compounds were released and reached as far downstream as the Concord River.

In 1983, the site was designated as a Superfund siteAn uncontrolled or abandoned place where hazardous waste is located, possibly affecting local ecosystems or people. Sites are listed on the National Priorities List for evaluation and cleanup by the U.S. Environmental Protection Agency.. Remediation and containment of the hazardous waste has been ongoing.

NOAA and other TrusteesGovernment officials acting on behalf of the public when there is injury to, destruction of, loss of, or threat to natural resources., conducted river-related studies assessing the damages to natural resources caused by releases of hazardous substances at and from the site that occurred throughout the 1990's.

In 1998, the Trustees, PQ Corporation/Nyacol Products and other responsible partiesThe individuals, companies, or government agencies responsible for an oil spill, hazardous substance release, or ship grounding incident. agreed to resolve natural resource damage (NRDA)Investigation performed by trustees to identify injuries to natural resources caused by oil spills, hazardous substance releases, and grounding incidents in National Marine Sanctuaries, and plan restoration activities. The goal of NRDA is to restore natural resources and compensate the public for lost recreational use. liability arising from the site. The responsible parties agreed to pay $3 million to the Trustees. That money is being used to fund a restoration plan that includes 11 projects benefiting wildlife, habitat, the landscape and communities of the Sudbury River.

Of particular concern to the State and Federal Trustees, and the basis for much of the natural resource damages claim, was the site’s impact on the river. Mercury contamination of open water habitats, as well as surface soils and exposed sediments downstream from the 35-acre site, likely resulted in direct and indirect injuries to fish, amphibians, reptiles, other aquatic organisms, birds and mammals.

Due to high concentrations of mercury in sampled fish tissue, the Massachusetts Department of Public Health instituted a Freshwater Fish Consumption Advisory for the Sudbury River from Ashland to its confluence with the Assabet and Concord Rivers in 1986. This advisory remains in place. Additionally, the Environmental Protection Agency Draft Baseline Ecological Risk Assessment also verifies that there are elevated levels of mercury in water and sediments downstream of the site, as well as in some species of benthicorganisms that live in and on the bottom of the ocean floor. invertebrates, fish, birds and mammals.

NOAA and other Trustees completed the Final Restoration Plan in August 2012, and have invited the public to participate in the ongoing selection of preferred restoration projects for funding. One current project under consideration would restore migratory fish to the Concord River. Fish passage on the river is presently blocked by the Talbot Mills Dam (also known as the Billerica Falls Dam) in Billerica, MA. The dam prevents migratory fish access to more than 35 miles of the main stem Concord, Assabet, and Sudbury Rivers, and more than 100 miles of tributaries to these rivers. The Trustees are considering actions to provide fish passage at the Talbot Mills Dam area.

A public meeting was held on February 23, 2016, at the Middlesex Canal Museum, 71 Faulkner Street, North Billerica, MA. NOAA restoration project leaders shared information and discussed alternatives to provide fish passage on the Concord River. You may view the presentation and the report electronically, and printed copies of the report are also available in the reference section at the Billerica Public Library at 15 Concord Road in Billerica. The public comment period regarding the draft report has ended. 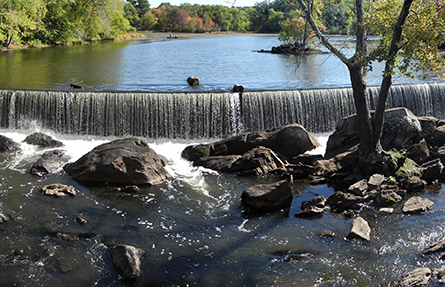 The Talbot Mills Dam in Billerica, Massachusetts, has been in this location since 1711.

"NOAA is excited that after close to 300 years of blockage, the opportunity presents itself to restore diadromous fish to over 135 miles of main stem and tributary stream habitat in the Concord River watershed."