From the late 1940s to the early 1970s, millions of pounds of DDTdichloro-diphenyl-trichloroethane; chemical compound manufactured for use as a pesticide until it was banned in the U.S. in 1972. DDT remains in the environment for many decades, accumulates in living creatures, and poses health hazards to humans, wildlife, and fish. and PCBspolychlorinated biphenyls; a class of chemicals previously used in manufacturing that remain in the environment for many decades, accumulate in living creatures, and pose health hazards to humans, wildlife, and fish. were discharged into ocean waters off the southern California coast. Most of the DDT originated from the Montrose Chemical Corporation manufacturing plant located in Torrance, California. This site was one of the largest DDT manufacturing plants in the world. The plant releasedits wastewater through an outfall pipe offshore, and a large amount of DDT settled onto the Palos Verdes Shelf.

Large quantities of PCBs from numerous sources throughout the Los Angeles area were also released into ocean waters through the same wastewater outfall pipe. Decades later, more than 110 tons of DDTs and 11 tons of PCBs remain in sediments on the ocean floor.

In 2001, NOAA and other federal and state agencies reached a settlement with the polluters, establishing the Montrose Settlements Restoration Program (MSRP). MSRP restores four main resources that were harmed by these chemicals:

Learn more about MSRP and what we have done to restore fish, wildlife, and their habitats in southern California! 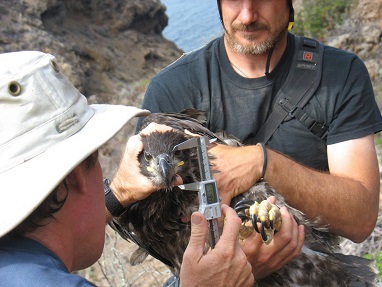 “The most rewarding experience to me is seeing the restoration concepts we developed during the writing of the MSRP Restoration Plan evolve into full-fledged projects that are making measurable impacts. I will never forget that day we first saw a little Bald Eagle chick in the nest at Pelican Harbor on the webcam—seeing the pair of eagles on Santa Cruz Island hatching a chick without human intervention was the moment I knew we were making a real impact.”