The Mattiace Petrochemical Co., Inc. site is located adjacent to Garvies Point Preserve along the north shore of Glen Cove Creek, a tributary to Hempstead Harbor on the north shore of Long Island. Beginning in the 1960s, chemical storage, blending, repackaging, and drum cleaning took place on site. Drum cleaning wastes were stored in a wet well and a leaching pool where they contaminated groundwater. Hazardous wastes reached the creek via runoff, underground piping, and groundwater discharge.

Drum cleaning discontinued in 1982 and other operations ended in 1987. The EPAU.S. Environmental Protection Agency; federal agency with the mission to protect human health and safeguard the environment. designated it as a Superfund siteAn uncontrolled or abandoned place where hazardous waste is located, possibly affecting local ecosystems or people. Sites are listed on the National Priorities List for evaluation and cleanup by the U.S. Environmental Protection Agency. in 1989.

Site-related contaminants impacted soil, groundwater, and sediment. Elevated levels of polycyclic aromatic hydrocarbons (PAHs)polycyclic aromatic hydrocarbons; a group of organic contaminants that are often the byproducts of petroleum processing or combustion. Many are toxic to aquatic life and several are suspected of causing cancer in humans., pesticides, and metals were found in sediment of Glen Cove Creek. NOAA and other trusteesGovernment officials acting on behalf of the public when there is injury to, destruction of, loss of, or threat to natural resources. estimate that 38 acres of tidal habitat have been injured.

A 1991 cleanup decision included treatment of groundwater and soil with some excavation, removal of infrastructure, and monitoring of groundwater and the creek. In 2014, changes included discontinuation of groundwater treatment, installation of bioventingis an in situ remediation technology that uses microorganisms to biodegrade organic constituents adsorbed on soils in the unsaturated zone. wells, thermal treatment of some soils, and restrictions on future uses of the property and the groundwater.

In June 2003, NOAA and other trustees reached a settlement agreement with some of the potentially responsible parties for natural resource damages that included approximately $200,000 for habitat restoration. Five projects (summarized in the 2014 Addendum to the Restoration Plan and Environmental Assessment) are currently under construction as part of this settlement: 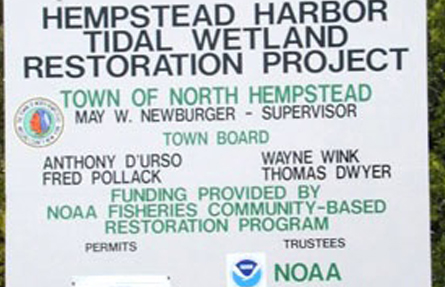 Hempstead Harbor successfully restored its salt marsh a few years ago, and will use the funds to remove invasive plants as part of its long term management efforts.

“The projects were selected specifically to address natural resources damages stemming from the release of chemicals into the soil and groundwater, and broadly to serve the interests of the community towards protecting landscapes, preserving history, and restoring habitats."