The Liberty Industrial Finishing site is located north of Massapequa Creek, a tributary to South Oyster Bay, on the south shore of Long Island. Aircraft parts manufacturing and metal finishing processes, largely in support of military efforts, occurred at the 30-acre site during World War II and the Korean War. Anodizing, electroplating, dyeing, painting, and finishing continued through 1978. Waste disposal practices resulted in contamination of soil and underlying groundwater. EPAU.S. Environmental Protection Agency; federal agency with the mission to protect human health and safeguard the environment. designated it as a Superfund siteAn uncontrolled or abandoned place where hazardous waste is located, possibly affecting local ecosystems or people. Sites are listed on the National Priorities List for evaluation and cleanup by the U.S. Environmental Protection Agency. in 1986.

A settlement agreement between NOAA and other trusteesGovernment officials acting on behalf of the public when there is injury to, destruction of, loss of, or threat to natural resources. and a group of potentially responsible parties (PRPs)The individuals, companies, or government agencies potentially responsible for an oil spill, hazardous substance release, or ship grounding incident. included the restoration of migratory fish passage between the Massapequa Tidal Channel and Massapequa Lake through construction of a fish ladder at one of two dams. The fish ladder provides fish, such as alewife and blueback herring, access to approximately 40 acres of freshwater spawning habitat. In the summer of 2015, six years after the initial construction of the ladder, large numbers of young alewife populated Massapequa Lake - proof of successful spawning and rearing of migratory fish due to this restoration project. 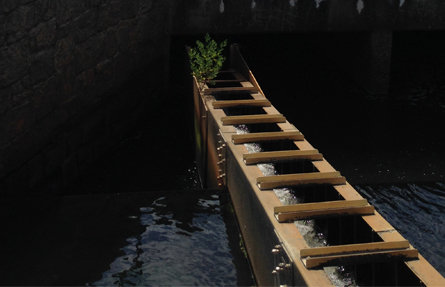 Alewife are spawning in the lake again, most likely for the first time since the creek was impounded more than 175 years ago.

"Scientific evidence suggests that a river herring born to this lake in spring, will arrive to the open ocean by autumn, and with any luck, will return to this river in three to five years as a mature adult ready to repeat the cycle. But scientific evidence alone does not prepare us for the joy of watching it unfold. Today river herring have returned to Massapequa Creek thanks to our efforts."