From the 1919 to 1994, the LCP Chemicals site was occupied by a series of industrial operations. An oil refinery, power plant, and a chlor-alkali facility released multiple hazardous substances into the surrounding area. Contamination has been found in Purvis Creek, Turtle River, Brunswick River, and surrounding salt marsh, all part of the Turtle-Brunswick River Estuary (TBRE). Primary contaminants are PCBs polychlorinated biphenyls; a class of chemicals previously used in manufacturing that remain in the environment for many decades, accumulate in living creatures, and pose health hazards to humans, wildlife, and fish., PAHspolycyclic aromatic hydrocarbons; a group of organic contaminants that are often the byproducts of petroleum processing or combustion. Many are toxic to aquatic life and several are suspected of causing cancer in humans., mercury, and lead.

In 1996, the site was designated as a Superfund site by EPA U.S. Environmental Protection Agency; federal agency with the mission to protect human health and safeguard the environment.. In 1999, approximately 13 acres of the most heavily contaminated marsh areas were excavated, filled, and replanted during an emergency removal action.

In 2016, a $28.6 million settlement was announced to further clean up the marsh. The settlement, entered into by Honeywell International and Georgia Power Company (responsible parties)The individuals, companies, or government agencies responsible for an oil spill, hazardous substance release, or ship grounding incident., with EPA, requires the companies to remove and isolate contaminated sediments in the marsh and to monitor the long-term effectiveness of the work.

NOAA has and will continue to provide technical input to EPA during the cleanup process.

Hazardous substances have contaminated over 700 acres of salt marsh habitat at the LCP Chemicals site. Natural resources under trusteeship of NOAA, the U.S. Fish and Wildlife Service and the Georgia Department of Natural Resources which have been exposed to these hazardous substances and, potentially injured as a result, include sediments and fish, soils, wildlife and other biota as well as surface water and groundwater. This contamination may have adverse effects on growth, reproduction, and survival.

Elevated levels of PCBs have been reported in bottlenose dolphins and their preferred fish prey species living in the Turtle-Brunswick River Estuary (TBRE) in Brunswick, GA near the LCP site.  Prior studies have demonstrated health impacts (endocrine disruption, changes to immune function) that were associated with PCB exposure in bottlenose dolphins near the site. The studies found that the pattern of PCBs  in both fish and bottlenose dolphins is similar to Aroclor 1268, which is the commercial PCB mixture that is associated with the LCP site operations. One study also indicates that the abundance of bottlenose dolphins in the TBRE was much lower than a nearby comparison site with similar habitat. The federally threatened West Indian manatee and wood stork are known to inhabit the impacted area.

In addition, elevated levels of mercury and PCBs have prompted the State of Georgia to issue fish and shellfish consumption advisories for various portions of the TBRE as early as 1992.  Consumption advisories persist today. As a result of these elevated contaminant concentrations and subsequent advisories, the public’s recreational use of natural  resources (i.e., recreational fishing) in the vicinity of the LCP site has also been impacted.

NOAA  is currently focused on evaluating injuries to resident dolphins in the Turtle Brunswick River estuary.  Ongoing studies include efforts to determine contaminant levels, reproductive success, and other aspects of the dolphins’ overall health, as well as to examine factors that influence dolphin population dynamics (such as survival rate and emigration/immigration). We are in the early stages of collecting and analyzing data.

In July 2022, NOAA with the National Marine Mammal Foundation and other technical experts conducted health evaluations of common bottlenose dolphins in estuarine waters near Brunswick, Georgia. The dolphin health assessments were part of an ongoing effort by NOAA and its natural resource co-trustees, including the Georgia Department of Natural Resources, to assess potential injuries and consider restoration options for natural resources impacted by the LCP Chemicals site.

The dolphins were temporarily caught so that scientists and veterinarians could conduct more in-depth health examinations and assessments and attach a satellite-linked tag to the dolphin’s dorsal fin. This work was conducted using standard protocols and procedures that have been developed for marine mammals and adapted for use in multiple coastal locations over decades.  The assessment took about an hour for each dolphin after which the dolphin was released on-site.

These capture and release health assessment activities were authorized under a Marine Mammal Protection Act/Endangered Species Act scientific research permit issued by the NMFS Office of Protected Resources to the Marine Mammal Health and Stranding Response Program and has been approved by the NMFS Atlantic Institutional Animal Care and Use Committee.

NOAA anticipates that the satellite-linked tags will continue to transmit for around 3-5 months, providing important information on the dolphins’ movements and range. The attachment system of the tags is designed such that external components of the attachment will corrode, releasing the tag from the fin.

Similar dolphin health assessment studies were previously conducted in the Brunswick area in 2009 to investigate dolphin contaminant exposures and associated health effects, and in 2015 to better understand dolphin ranging patterns following the 2013-2015 dolphin morbillivirus outbreak along the U.S. mid-Atlantic coast. 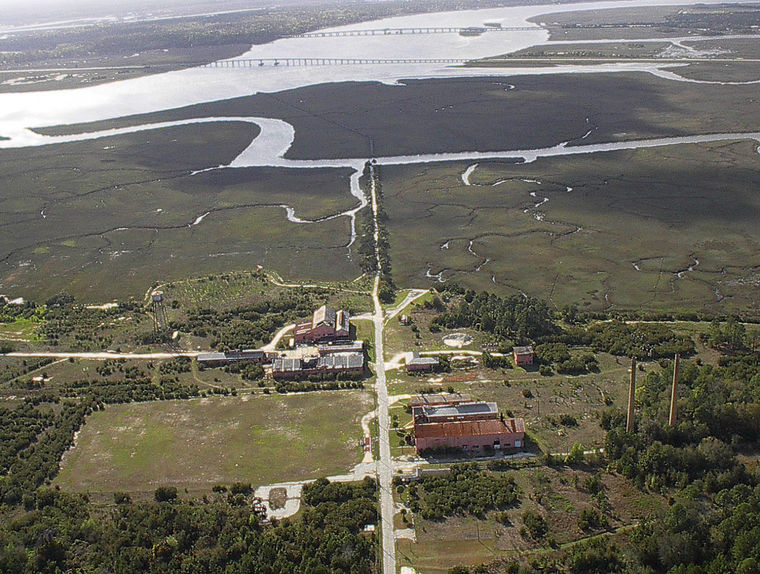 Aerial view of LCP Chemicals site and upland marsh along the Turtle River.

“Contaminants of concern released from the LCP site have found their way into this fragile estuarine environment that is home to valuable species and habitats. It is important that the natural resource trustees use sound scientific methods to quantify injuries to these resources and to compensate the public with appropriately designed and carefully implemented restoration projects.” 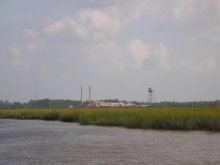 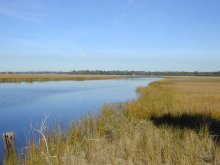