Beginning in the late 19th century and continuing for nearly 70 years, a coal tar processing plant released wastewater directly into the Island End River. The wastewater contaminated river sediments with PAHspolycyclic aromatic hydrocarbons; a group of organic contaminants that are often the byproducts of petroleum processing or combustion. Many are toxic to aquatic life and several are suspected of causing cancer in humans.. The Island End River is a small tributary of the Mystic River, which empties into Boston Harbor.

Operations ended in the late 1950s, and the manufacturing building was dismantled in 1960. In 2007, the Commonwealth of Massachusetts worked with the responsible partiesThe individuals, companies, or government agencies responsible for an oil spill, hazardous substance release, or ship grounding incident. to dredge more than four acres of the Island End River. They placed the contaminated sediments in a 1.8-acre confined disposal facility built within the dredged area. In compensation for the cleanup’s impact on tidal habitat, the polluters also completed a mitigation project, restoring four acres of salt marsh and mudflats at Oak Island in nearby Revere, Massachusetts.

High concentrations of PAHs are still present in river sediments downstream of the facility, despite the extensive cleanup.

Large amounts of PAHs accumulated in sediments in the Island End River. This impacted habitat quality and severely decreased the food supply for winter flounder, alewife, striped bass, and other fish. Coal tar mats formed along the banks of the Island End and Mystic Rivers downstream of the site. PAHs were also found in some areas spanning a depth of 12 feet.

Levels of PAHs remain extremely high approaching the Mystic River, so recreational fisheries and supporting habitat in the Mystic River have also likely been adversely affected.

NOAA and our partner trusteeGovernment officials acting on behalf of the public when there is injury to, destruction of, loss of, or threat to natural resources., the Massachusetts Executive Office of Energy and Environmental Affairs, conducted a cooperative natural resource damage assessment (NRDA)Investigation performed by trustees to identify injuries to natural resources caused by oil spills, hazardous substance releases, and grounding incidents in National Marine Sanctuaries, and plan restoration activities. The goal of NRDA is to restore natural resources and compensate the public for lost recreational use. with the polluters. The NRDA investigated the extent of injuries from site-related pollution, and yielded a $300,000 settlement to cover assessment costs and restoration.

In May of 2015, we released a draft Restoration Plan for public comment. The selected project restored an additional 1.2 acres of salt marsh habitat at Oak Island, supplementing the existing mitigation project. 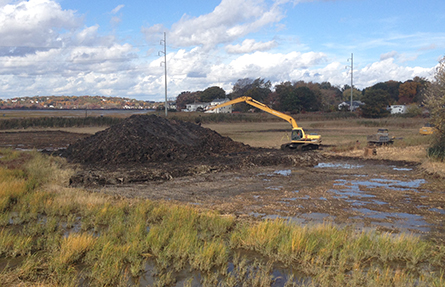 Oak Island wetland restoration under construction in late October and early November of 2015.

“Along the Mystic River watershed, pockets of nature such as streams and riverbanks provide residents with a respite from the urban landscape. The restoration project that will result from this settlement is meant to compensate the public for years of pollution.” 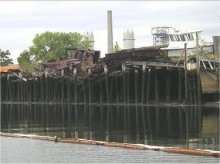