In Orange County, Texas, parts of the Sabine Lake/Neeches River Estuary were contaminated by industrial and municipal waste disposal, including sludge from local petrochemical industries, starting in the 1960s. Industrial waste disposal was discontinued in the late 1960s, but municipal and construction wastes were accepted until about 1971.  In 1986, the U.S. Environmental Protection Agency (EPA) added the site to the National Priorities List, based on the release or threatened release of hazardous substances, making it a priority site for investigation and potential clean-up under the Comprehensive Environmental Response, Compensation, and Liability Act, also known as the Superfund law.

In 1988 a study was conducted to understand how to best clean up the site, and in June of that year, the EPA selected a remediation strategy. Remediation began in 1993 and was completed by august 1997.

The Bailey Site is an inactive waste disposal facility situated within a tidal marsh along the Neches River, approximately 5 km (3 miles) southwest of Bridge City in Orange County, Texas. The Site, including two ponds, encompassed a total of approximately 280 acres. The Site is surrounded by salt marsh wetlands that are part of the productive Sabine Lake/Neches River Estuarine ecosystem. The wetlands and subtidal habitat of the Sabine Lake/Neches River Estuary contribute nutrients to and enhance productivity of Sabine Lake and serve as important nursery and adult habitat for a variety of oligohaline and marine fish and invertebrate species.

The Final Restoration Plan and Environmental Assessment (RP/EA) for the site was finalized in January 2003 concluding that slightly over 28 acres of estuarine marsh habitat would need to be created to restore injured natural resources at the site. Specifically, the RP/EA identified intertidal marsh creation should happen in the Nelda Stark Unit of the Lower Neches River Wildlife Management Area (Bessie Heights).

The Trustees implemented a marsh creation project in Bessie Heights that used dredged materials from the Neches River to create estuarine marsh. Leveraging settlement funds with a matching amount of U.S. Army Corps of Engineers funding more than doubled the area of marsh created compared to the originally proposed 28 acres. Construction of the resulting 71-acres of marsh was completed in November 2003, and the area was planted with marsh vegetation in the spring of 2004. 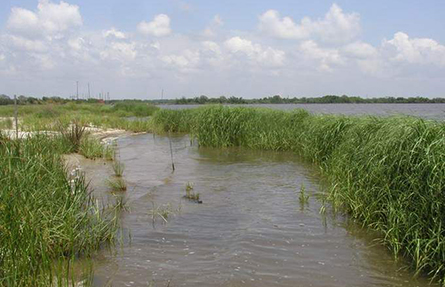 "We completed restoration of 71 acres of degraded marsh habitat at Bessie Heights, near the former industrial dumping ground of the Bailey Waste site, in 2003. That project has supported habitats for fish and invertebrates contributing to a healthy coastal ecosystem in Neches River and Sabine Lake Estuary for over a decade."